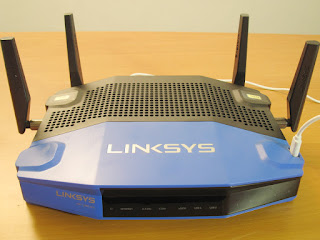 A while ago I purchased a Linksys WRT1900ACS-v2 router to replace my aging 15-years firewall (still running kernel 2.4 on an old VIA Eden board!). This device is pretty nice, it's fully supported by Linux mainline, it offers multi-gigabit connectivity with a real CPU (Marvell Armada 385), has lots of RAM (512 MB) and storage (256 MB NAND), and dual-band WiFi. Yes I know, having NAND flash nowadays instead of eMMC is still annoying to deal with, but I won't need to write often, so I certainly can ignore wear leveling since I'll only be loading the rootfs into RAM. This will be plenty of room to run Formilux with nftables.

I don't have much time to devote to its conversion and I figured that if it's still not in production, it's because I don't want to switch to it before I'm 100% confident about the config and it doesn't have an accessible serial console to allow me to recover from my mistakes. Thus I decided to work on exposing a serial console before finishing its configuration.

Linksys engineers were really cool with this device, you don't need a soldering iron as they already placed the connector inside. You have remove the screws under the rubber pads and strongly pull apart the blue from the black parts to access it. 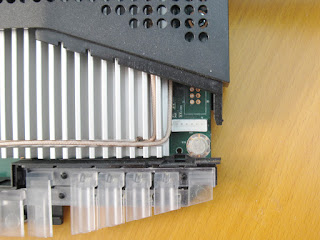 There are still a few caveats though :
Thus it is not as trivial as it seems to simply place the connector outside.

After measuring the voltage on the pins and doing a few attempts, I finally came up with this pin-out : 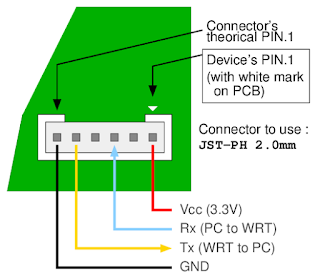 That's fine, I don't need the +3.3V since I intend to connect this to a USB serial adapter which is alimented by the USB bus. So I can use a 4-pin connector which will cover the connector's pins 1 to 4 (motherboard pins 3 to 6). Such 4-pin connectors are easily found with many motherboards which provide a sound connector for the CD/DVD drive. It's the same! Yes it only has 3 wires but that's what we need : GND, Rx, Tx. 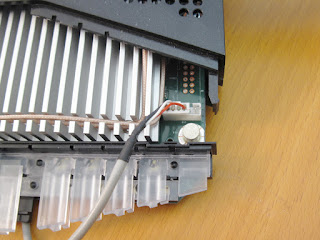 I picked a CH340G-based micro-USB to TTL adapter like this one, which supports working on 3V or 5V (I've set it to 3V) : 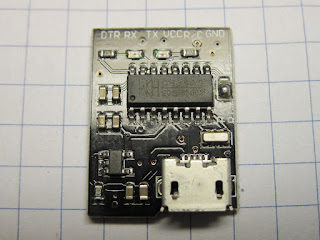 Connecting this adapter to the connector revealed the issue with the too strong pull-UP. So I decided to try to attack it various ways. First, I cannot replace the pull-up on the adapter because it's inside the chip itself. In the end, the easiest and most reliable solutions I found were to use either a 2N4403 PNP transistor or a low voltage AO3407 P-channel MOSFET with a much weaker pull-up. These ones would amplify the WRT's Tx pin negative signal to act  stronger on the adapter's Tx input pin. I tried the two following diagrams and finally decided on the MOSFET one since it features an even weaker pull-up :

Since I had to add components to the board, I wouldn't be able to use the existing 6-pin connector, so I desoldered it to make the PCB thinner. Be careful, on mine the Tx PCB pad went off. Fortunately it's didn't serve as a via and is not used, it just made my task a bit more complicated to figure what pin the signal was going to : 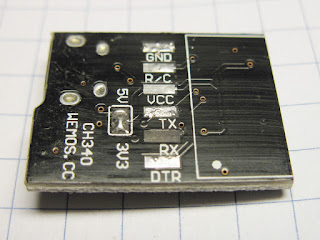 Then I noted the soldered the MOSFET and the resistor on the PCB close to the IC : 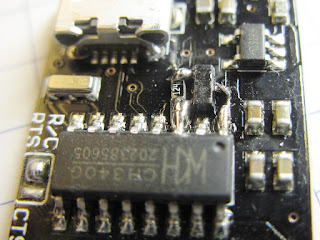 And connected the extremity of the wires there. Note if you reproduce this design, I left far too long wires, you could shorten them to 15 cm I think. 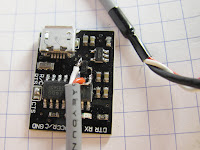 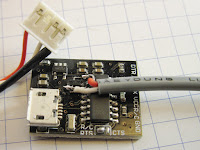 Every device needs to have at least one hole for a console connector :-)

It wasn't easy to find an accessible place for this connector. I tried to place it in front, but this required disassembling the front panel which I failed to. There are screws below the label underneath but despite these the front panel doesn't come off. It looks like there are molten plastic joints at various places holding it firmly in place. In the end I found an empty place above the front right rubber pad. I drilled a large enough hole to let a micro-USB male connector enter, and placed the adapter there on top of dual-sided thick tape against the internal plastic wall. It looks as if it was made for this, there's very little margin there. 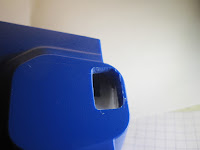 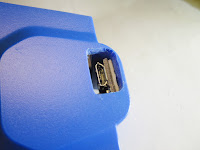 I don't want dust nor random metal stuff inadvertently entering the hole, so I wanted to fill it with hot glue. The difficulty with hot glue and USB connectors is that it tends to fill them up so that it's not possible to insert anything anymore there. So I had the idea to insert the USB connector before filling the hole with glue. But I didn't want my USB connector to be glued. Thus I reused the dual-sided tape protection. By definition it's non-adhesive, so I adapted it to the hole's form and placed it around the micro-USB connector. This way I could plug the hole while filling with the glue. The result is perfect and the adapter cannot move anymore. 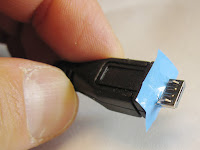 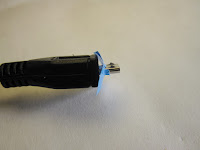 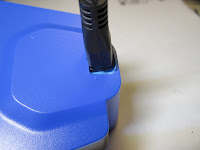 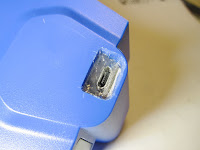 Reassembling the device is almost as easy as opening it except when you have an excess of cable as I had. You have to find tiny places to push a few centimeters of cable in order for everything to fit. But once reassembled, it looks very clean, and the connector is very easy to access from the front. 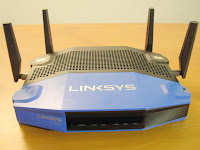 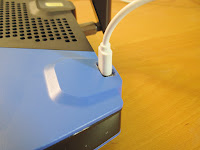 And of course it works fine, I can now attach minicom to it at any moment to watch the boot process (yes I know there's no password now, I'll set one at the end of the installation) :

Now I can finish to install it and play with nftables without fear of being locking myself out ;-)