A bit of background

Since my last experiment at shrinking down USB batteries to fit in my pocket, I made a few observations resulting in new improvements :

I initially thought about just replacing the charging board by a new one. Most TP4056-equipped boards nowadays come with a micro-USB connector. But while looking at this, I started to think about the other aspects and considered some charging+DC/DC boards as well.

I found a number of new DC/DC boards but as some readers may remember from my previous experiments, most of these are unable to deliver even 1A, let alone the 1.6-2A that I need for my bicycle's light. But recently a few very capable chips appeared : TP5400 and TP5410, equipping a few boards such as these ones.

I bought 5 of these boards and ran a few tests. They are able to deliver 5V at up to 2.8A max from 3.8V in. So there's some hope to run everything with a single board. I bought the version without the USB connector to try to optimize component placement. 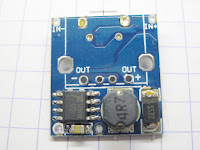 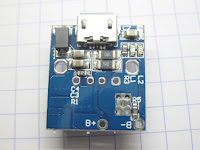 The board is mostly flat on one side and mostly flat on the other one. Thus I decided to cut the board in two to split the charging part from the discharge part to stack all the components (the charge only needs the micro-USB connector and a few leds). 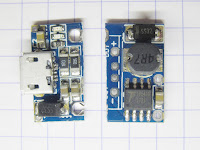 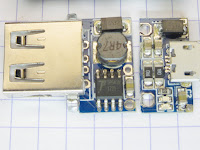 Default USB connectors are very high. Instead I picked a recessed USB connector, which perfectly fits aligned with the PCB. That makes a very thin board+connector. The coil became the tallest component so I tried a few other smaller ones I had, and ended up using a small 10 µH one.

I reinstalled the output decoupling capacitors against the USB connector and close to the output diode, which I doubled to reduce losses (there was enough room).

The charging LEDs and their 1.2k resistor were installed directly on the charging chip's leads. I don't need direct visibility, the hot glue I'll use to finish the assembly is translucent enough to make the green/red colors pretty visible. 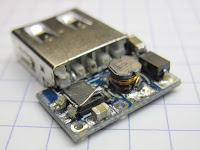 I also noticed during a few experiments with such a board in a previous design (v2n never documented), that the TP5400/5410 stop charging at 1/4 of the programmed charging rate. While it's possible to charge small batteries in 15-30mn, it's problematic to cut off at 1/4 of the rate because they're far from being charged, in part due to the losses in the battery's protection circuit. So I had to replace the programming resistor (1.2k by default) with 4.7k and finally 10k to lower the charge current to around 200 mA (the TP5400 and 5410 have slightly different currents for the same resistor).

I kept the small part of PCB attached to the micro-USB connector as a more convenient support for this connector. 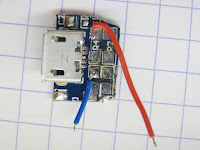 After completing this assembly, I just had to reconnect the battery to the circuit and verify that it could still deliver power and charge. The battery still needs to be a high rate one. I'm using 20C at 240mAh, that's 4.8A max output. When the battery is about to be discharged near 3V, that's still 14.4W, or 2.88A under 5V assuming 100% efficiency (which never happens), so that doesn't leave much margin in the end! Given that TP5410's internal MOSFET supports up to 4A, it's important that the battery is at least that strong. That's 25C for 160mAh, 20C for 200mAh, 16C for 250mAh, 12.5C for 320 mAh.

The resulting assembly with a 240mAh battey is very thin as can be seen below, 12mm thick, 20mm wide and 34mm long. There's very little wasted space now, which is noticeable when filling it with hot glue because very little glue is needed to keep the parts together.

I found that some unused space was left next to the USB connector. Just enough to place a powerful LED, a button and a resistor. So I cut two pins from a small button, soldered a 39 ohm resistor to it with the other end connected to the +5V output. The other end of the button was connected to the LED's anode, whose cathode was directly soldered to the USB connector providing the ground. This way pressing the button delivers 60mA into the LED and makes quite a bright torch.

As for v2, I simply placed two crossed layers of heat shrink tube, one in each direction, completely covering the connectors and the button, thus completely closing any hole. Then I just cut the tube around the USB connectors and the assembly is finished. The tube is soft enough to let the LED button be pressed through it. 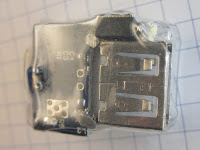 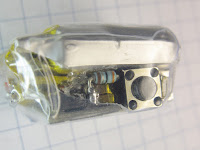 I spent a lot of time trying to figure the best way to assemble the parts together. I even hesitated to make a PCB. That may be for v4. What I figured, which will be useful for future designs (and for anyone willing to make a commercial version of this) :
An example of more efficient component placement is this one : 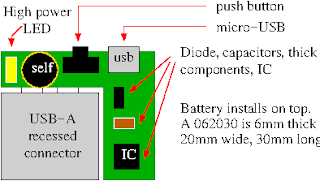 Feel free to copy this design and improve it. I'll be happy the day I can simply buy such a small pocket battery without having to spend a week-end building it myself :-) Do not hesitate to share suggestions and comments of course!

Posted by Willy Tarreau at 6:39 PM No comments: